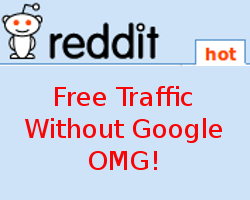 It is a common problem with internet marketers who spend all their time trying to get traffic from Google and work through every SEO trick in the book only to find one day that Google moved the goalposts and slapped their site down the ranks into oblivion, taking away all that hard earned traffic forever.

The important thing you must understand is that Google is NOT the only source of traffic, in fact search engines in general and SEO are not the only places you can get traffic and you must work on building traffic from other places so that if Google ever does drop the ban hammer on your site it wont matter so much and wont put you out of business.

But where else can you get traffic without paying for it? Well there are actually many places but this article will cover one in particular – Reddit.

Reddit is an extremely popular social bookmarking/discussion community and getting your article on the front page could bring you gazillions of visitors and probably melt your server in the process! However getting on the front page is no easy task since there is massive competition plus a lot of that traffic is not going to be targeted and wont convert so is just burning through your bandwidth for nothing – there are still ways to convert that though!

The Key to Success

The key to success on Reddit is to pick a relevant niche – a so called subreddit. If you browse around Reddit you will find hundreds of subreddits, many have very little traffic but some have tens of thousands of subscribers many of whom would be interested in your content and will click through to your site if you do it right and even better – they WILL click your ads and they WILL buy stuff – I speak from experience..

For example I recently spent a few hours writing a good article, targeted to a subreddit and posted it on my blog (not this one) then spent the whole night babysitting my server as it struggled to cope with the sudden increase in traffic – many thousands of visitors poured in over the next 24 hours and I got about 800 clicks on my affiliate ads and lots of sales.. it was a good day. 😉 Even better, the link got shared on facebook, twitter, forums and elsewhere which all sent even more traffic and sales over the following week. All this from just a few hours work spent on doing the job right.

Doing it right means creating good quality content, relevant to the subreddit and not spamming them! There are rules on Reddit (and more on subreddits) which you should try to stick to as much as possible – they generally do allow you to post links to your own site as long as that’s not all you post – the ratio should be around 1 in 9 or 10. So go find 9 other decent sites/articles to post and then post yours.. also make sure to post good comments. Reddit has a voting system for links/articles submitted as well as comments and so the more you post the higher your score – as long as you don’t get down-voted too much. Over time you will build up a good reputation. (hopefully!)

Just posting a link to your article there doesn’t mean you will get massive traffic though – it needs to get upvoted enough to make it to the front page of the subreddit and the subreddit in question needs to have enough traffic. The amount of traffic is easy to find – on the right side of every subreddit it will show you how many subscribers it has AND how many are online at the moment.

The trick is first to find one with enough subscribers (at least thousands) and then to monitor it for a while to see what time of day and what day of week has the most people online and then you post your article at that time so it has a greater chance of being noticed and getting enough upvotes to strike gold. The reality is if your post doesn’t get noticed fast it will never make it to the front page and will quickly sink into oblivion.

Timing is (almost) everything with a Reddit post – when more people are online there you can get more attention but you could ‘cheat’ a little by getting your friends to upvote your post to give it a little boost at the start.. with luck it will then take on a life of its own. It may be somewhat against the rules to get your friends (or you with other accounts ;)) to upvote your posts so it is up to you if you want to do that.

The other key to success is researching the subreddit to see what sort of posts get attention and upvoted to the front page and study the culture of that subreddit – learn what works and then model your articles on those (but don’t just copy – be unique!). It does involve a certain amount of trial & error but that’s part of the fun and even your failures will still get some traffic, perhaps even a few hundred visitors over the course of a week instead of thousands on the first day if it is a success. It all adds up.

You should also make sure to babysit your reddit posts and reply to any comments there, even the bad ones.. that way you don’t look like a hit & run poster and there’s a better chance it will get some traction.

It is worth noting also that none of this involves using any fancy, expensive tools.. all you need is your eyes and brain to do a bit of manual research on Reddit and then write a suitable article and submit it. It doesn’t cost you a penny, just your time and the payoff is potentially huge.

How to CONVERT this Traffic

There is another very useful way to make sure you actually benefit from all the massive traffic which Reddit (and others such as Stumbleupon) can send you and that is with retargeting. This just means you will show your ads to these people AFTER they leave your site – you know they are interested in what your site is about but it is very hard to convert these visitors to buyers or members on that first brief exposure. However if they then see your advert on other sites they will be reminded or nudged repeatedly and the chances of them coming back to your site is very high and then they are much more likely to convert.

Personally I use AdRoll for retargeting as it is one of the biggest ad networks specializing in this sort of thing and it is very simple to setup on your sites. It is also very cheap and they provide great stats so you can see exactly what converts and how much each click and each conversion is costing you – probably a lot less than you think! Not retargeting your hard won traffic is basically leaving money on the table.

Over time you can build up a lot of links on Reddit which will also be indexed by Google and others and you can get a steady stream of traffic many months and years later so you win twice!

Reddit is a potential goldmine if you do it right, play within the rules (mostly) so you don’t get banned and produce good content targeted to the specific subreddit subject and culture.

As mentioned before, there are other places to get traffic as well which we will cover in other articles so subscribe to our free newsletter or rss feed to make sure you don’t miss those.